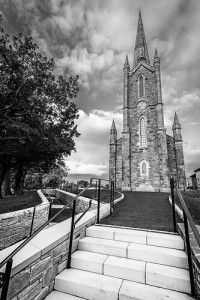 Built between 1825 and 1828, consecrated in 1831 this Gothic style Church of Ireland Church retains its early form and architectural character.

Originally designed and constructed by local man William Graham who also built the church of Ireland in Killymard in 1830. These two churches are the only ecclesiastic commissions known to have been built by Graham.

Notable for the quality of the cut stone detailing particularly to the tower , spire and pinnacles. The layout of this church is typical of the standard three bay hall and tower church which were built in large numbers, particularly between 1808 and 1830 using loans and grants available at that time.

This church was later extended in 1890 with the addition of an organ chamber, chancel and vestry room.

The elegant needle spire is a typical feature of these churches built in urban locations during this period and is a landmark feature in the skyline of Donegal Town.

Its Interior  is distinguished by the fine cut stone, chancel arch, organ chamber and intricate tiled floor which is currently being refurbished.

Only recently an access ramp has been added to the exterior of the church.

This church and its history is a very important element in the heritage of Donegal Town.